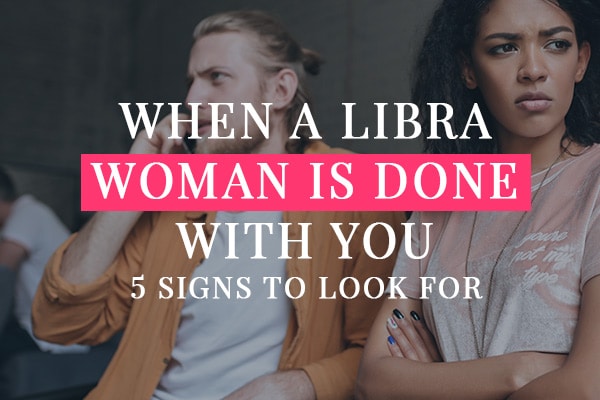 Fear the writing may be on the wall between you and your Libra woman? Maybe you’ve noticed things have grown abnormal between you two. Perhaps she’s sending you mixed signals. Whatever the case, you want to get to the bottom of it quickly for the health of your relationship.

In this piece, I’ll go over five major signs that your Libra woman has decided to end your relationship. I’ll also go over some common actions that turn Libra women away so you can better tell if your status as a taken man is in peril.

Keep reading to find out if she is ready to move on with her life or is still in love with you.

What Turns a Libra Woman Off

There are a number of turn-offs you should keep in mind when dating a woman of this Zodiac sign. Make sure to never do these when dating a Libra. If you’re guilty of the following crimes, it’s likely that your relationship fears have at least some grounding:

Think your Libra woman is a great shoulder to cry on? Think again. While this Zodiac sign is caring and thoughtful, Libra women do not like being around sad or negative people all the time. They certainly do not want to enter relationships with them. They are quickly drained and instead like to focus their energy on positive people and situations. Being mopey-dopey constantly is a sure-fire way to remove any interest she may have had in you.

Libra women also dislike constant criticism. While these women are naturally intellectual and can take constructive criticism well and to heart, they can easily become sensitive if you badger them about their ideas, their appearance, or their behavior. For this reason, be sure to keep your complaints to a minimum if you want to make them happy.

How to Know When A Libra Woman is Done with You

With this in mind, let’s now take a look at some clear, astrology-guided signs that a Libra woman is ready to exit your relationship:

It couldn’t be more obvious: if your Libra lover is constantly cancelling dates, ignoring your phone calls, or generally spending time by herself, this is a major red flag that she is ready to move on. Rather than hurt you outright, a Libra will instead withdraw into herself as she tries to figure out the best path forward for the relationship.

In these cases, I suggest that you give her a bit of space—but also know when to step in as well. You shouldn’t seem as if you are invading her privacy—which this Zodiac sign values—but instead need to give her space to think and then come to her with reasonable thoughts of your own. By being someone who can respect her space and come back to her with potential solutions, you may make it easier for her to continue with you.

Women of this Zodiac sign may also become more conceited when they are ready to move on. Even when a Libra is clearly in the wrong, she will fail to recognize her faults when the two of you argue. She will become stubborn and unrelenting, and no matter what you say, you won’t be able to get through to her. In short, a Libra will totally disregard what you want and feel in favor of her own desires and needs.

For her, this is easier than arguing with you. After all, in her mind, you aren’t someone worth spending the time to argue with. A Libra would rather save her energy into channeling a positive relationship with someone else—as dire as that may sounds. This will help her find what it is that she wants when she finally does exit the relationship with you. If you’ve picked up on any of these signs, it may be time to talk with her candidly.

On a related note, your Libra woman will exclude you from her activities and from her life in general. She will be too busy to meet up after work, and she won’t even be able to find the time to call you on the phone. If she exhibits this behavior over the long term, you can be sure that she is more than simply upset.

This is especially true if she continues to see other people. This is done with the intention of sending you a clear signal: you aren’t the person for her. For women of this Zodiac sign, exclusion is preferable to arguments that may not ever be resolved. She won’t care how you feel about it. If you’ve noticed signs of this, it may simply be the end.

A Libra woman may also turn superficial when she’s decided to end things. Per astrology and the Zodiac, she will focus on the obvious characteristics that she can be critical of and will generally ignore your deeper thoughts, wants, and actions. During this stage, she may be critical of the way you say things, your appearance, or any of your minor slip-ups.

She may also be unable to let things go once they occur, holding them over your head as an excuse not to interact with you. If this sounds like your relationship, you can be sure that it is in peril and requires some serious work and attention before you can make it functional again.

Astrology shows that Libra women are generally kind and caring. All this goes out the window, though, if you hurt them in a significant way. If you cheated on your Libra partner, for instance, you can guarantee that this Zodiac sign will crave revenge. While she may not cheat herself, she will find something significant with which to hurt you, whether that be criticism of you or generally being rude.

Because such behavior is uncharacteristic of a Libra woman in love, if your partner exhibits this behavior, you can rest assured it’s because she is hurt—and potentially wants to leave you. The right path forward, then, is to get to the bottom of things, recognize your faults, and gently see if there’s a way to continue your relationship. From there, you’ll need to read the signs to see if the relationship is worth saving.

What do these signs say about your relationship? Hopefully that you’re in the clear! Only you can know for sure the best road forward for your relationships in 2020. Using this astrology-based information, I believe you can get your relationship and your Libra woman’s love back—or, at the very least, end it with her on amicable terms. Whatever the case, you now have the tools you need to give it your best shot. Perhaps, with this guide, you may even win that special Libra woman back. Good luck!