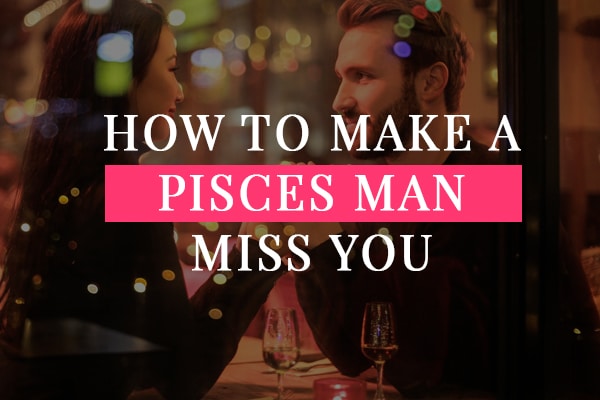 How To Make A Pisces Man Miss You​

Do you find yourself often saying the wrong thing to your Pisces crush?

Are you thinking your Pisces crush is talking to someone else or losing interest in you? Has he suggested he wants a break?

Do you often find yourself thinking about your Pisces crush, you miss him but does the Pisces man miss you back?

This can happen from time to time but it’s important to try and keep a level head and approach it more rationally. Once you have a good understanding of the Pieces man’s characteristics, you’ll know what to say and what not to say.

Try to remember that a Pisces man typically keeps things and problems to himself instead of discussing with others.

I met a Pisces guy online a few years back, I found myself worrying from the regular silences if he was thinking of me. I remember closing my laptop lid, walking downstairs to make a coffee and think back to my psychology course. I took the foundation of what I’d learned there and started to research if there was some evidence behind it. I was reading and reading, and all the evidence tied up to my research. Is it possible to make a Pisces man miss you? – It absolutely is! Read on to find out how I managed it.

Read next: How to Seduce a Pisces Man Through Text

What you’ll learn in this guide;

Pisces is a water sign and assigned to people who are born between February 19th and March 21st.

The twelfth zodiac sign lands on the under the water sign. The Pisces man is honest, romantic, giving but also sensitive. Pisces are very emotional souls, they tend to feel how you are feeling. He absorbs the emotions of the people surrounding him and is sometimes overwhelmed almost as if he’s drowning. He wears his heart on his sleeve, so tread carefully. Make sure you read the pointers in this guide and afterwards you’ll have a better understanding of the Pisces man.

The Pisces man is creative and tends to bend the rules to suit him, but it’s important to remember he can be quite blunt and rude if he feels ignored.

A Pisces man tends to be very sensitive, especially to those that he’s let into his inner circle of trust. If there is a problem within your relationship or with you, the Pisces man normally knows before anyone else.

Try to keep in mind that the average Pisces guy aims to please. He will seek to make you happy where ever he can, whether it be in the bedroom or a gesture of good will. Most Pisces’ men take it quite personally when you are not happy.

Pisces guys lust for a sexy elusive and mysterious partner. If you find yourself overthinking whether he’s still interested in you or looking elsewhere, be creative and unpredictable.

Other suggestions for making a Pisces man miss you: 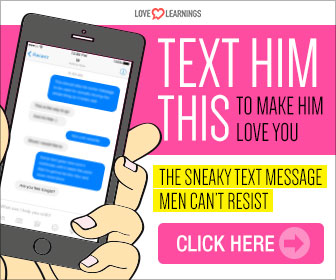 how to make a pisces man miss you

Try to initiate a bit of flirting, the aim is to make him ease up and relax. To remember how things used to be between you, try to keep things light-hearted and a good bit of fun, throw in some compliments about his hair or outfit.

You’ll want to make the subject of conversation all about him, because it’s rare that he opens up.

Be his friend, make him feel comfortable confiding in you. It’s hard for the Pisces man to open up especially once he feels embarrassed or belittled, so empower him to speak to you.

Pisces is a feminine sign, which means the Pisces man is sensitive, kind and understanding.

This is your time to shine, even though you might feel like he’s slipping away. Show him you’re a kind person who wants the best for everybody around them. Your Pisces man thinks that this is one of the most important characteristics in a lady, alongside generosity and in touch with their feelings.

3. Leave something for him

Think along the lines of his favorite video game that you bought him, leave it on top of his console so it’s the first game he sees. Bring items to the front of the fridge that you both love. Leave items of clothing around his place, in his sock drawer or on his sofa.

When he finds your clothing or smells your scent on his duvet or pillows, he’ll have an instant happy feeling and want to text you. Being a Pisces man he is likely to tease you with blunt messages to see if you are keen, or sometimes play with you by seeing if you’ll reach out first.

A Pisces man is looking for a woman who knows who she is and is comfortable in herself. If he clearly likes you, don’t try to be someone else. He likes you for a reason, and will be confused if you suddenly start acting differently.

He’ll know something is up if you start acting differently, he’ll begin to wonder which is the real you and start having doubts about the whole relationship. This sort of behaviour will cause a disconnect.

Remember to be kind, sincere and thoughtful, treat him like you would like to be treated. Being a Pisces man he’ll return the favour in kind. One of the core traits of a Pisces man is they aren’t very good at being alone if they are into their partner. So inevitably he’ll be missing you when he’s not with you.

You may have noticed, the more time he wants to spend with you means the more he likes you and will end up falling for you. Pisces men are very loyal and honest, you’ll never have to wonder where his heart is.

If you’re not at that stage yet, not to worry just try to keep things simple. Be playful, flirt with him and remember to leave something subtle behind.

Try and get him to drop you home in his car and leave your favorite lipstick or lip gloss in the passenger seat for him to find, which will make him think of you.

The average Pisces guy are quite predictable if you follow the tips in this article, you’ll have him eating out of the palm of your hand in no time.

5. Be patient and wait

Don’t communicate with your Pisces man everyday, give him a chance to breathe and digest his feelings and emotions.

When you do communicate, keep things positive, and respect his wishes. If the Pisces man asks for a little bit of space, don’t assume the worst and think things are over. It would be a fatal mistake to blame or make the Pisces man feel guilty. Things that have happened in the past, leave them there.

Don’t bring up old arguments or problems, focus on the future and in this case how to make him miss you.

Let him breathe a little, and while he’s taking a moment, this is also a good time for you to focus on what you really want. Just keep things light, remind him of what you and he have built together and how you can push through this but don’t bombard him with messages.

The Pisces man is intelligent enough to notice if your intentions are too obvious or tedious, he might get scared and pull away. This is especially so if you’ve hurt him before, you need to be gentle and careful for his emotions.

The Pisces man doesn’t trust people easily, so it’s going to be hard work to build trust again, hard but not impossible.

Remember, the Pisces man is very sensitive so he could look into every text you say with a fine tooth comb, be careful when writing your texts, don’t be too forceful. This could end up hurting him further, be lighthearted and playful and make sure you compliment him a few times but not too much!

Final thoughts on how to make a pisces man miss you

The Pisces man is sensitive, loyal, honest and not quick to trust new lovers. But a positive to remember is that they never stop having feelings for ex-partners who they used to have strong feelings for. Nostalgia is your friend, subtlety remind him of good memories you once shared at the early phases of your relationship.

Think about the romantic gestures and moments you shared, but try to keep it subtle and spread out your messages throughout the day.

Don’t message him everyday! It’s hard to miss someone if they are always there, if he messages you – don’t reply straight away, leave it a few hours and then reply.

Be playful, flirt with him a little. Compliment him on his latest picture on social media, whether it be that his shirt looks great or you like his hair. Make sure he knows that you think he looks good.

How To Get A Pisces Man After Breakup 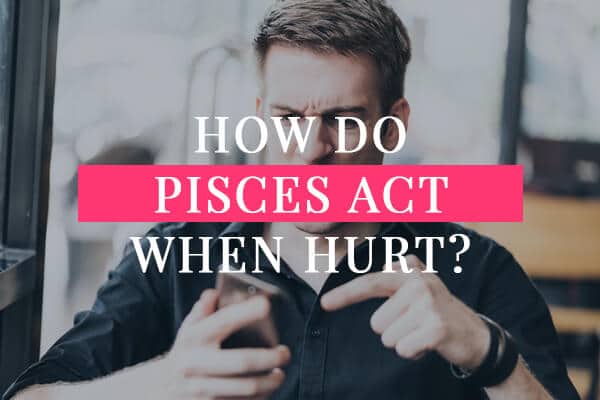 How do pisces act when hurt Pisces Zodiac Sign: 19th Feb – 20th March  Pisces is the ruler of Neptune.